For this photo shoot with Model Mayhem model Beckiimay the idea was a clash of ideas.On one hand we had a glamour style shoot(red lipstick,partial nudity)then the religious iconic theme of a crown of thorns,handmade by Liv Free also a model as well as making accesories. 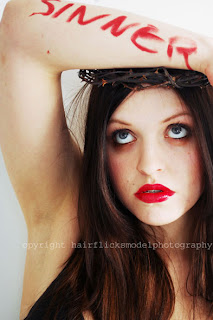 You can see the headpiece here,it was real and sharp! Care was taken not to press it down too far onto Beckii's head! Using the red lipstick I wrote on her arms ,in mock self harm imagery but also it obviously being lipstick lent itself to glamour angle.Other shots on the website eventually-will show the words "repent" and "Sacrifice" on her left arm.
For this shot below, which was inspired partly by fashion photographer Miranda Kerr and partly by scenes in horror film Jacob's Ladder where strange faces blurred as they thrashed around. It took numerous attempts using motion blur flash technique,having Beckii move her head during exposure. A little post processing to give it an ethereal look and maybe it was something near my vision. 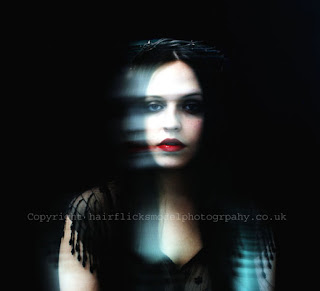 More shots will be featured on my Fashion photography website soon(at time of writing this anyway!) anyone wishing to have a portfolio photoshoot get in touch via the site above. Thanks.
Posted by John at 14:34 No comments: